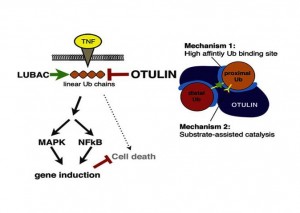 Ubiquitination of proteins:
Ubiquitination is an important post translational modification (the addition to a protein after it has been synthesized) where ubiquitin is attached to a substrate protein. The addition of ubiquitin to a protein regulates many diverse processes:
• Signaling for protein degradation through proteasomes/ lysosomes
• Intracellular trafficking – co-ordinate cellular localisation of a protein
• Alter protein activity through the activation/ inactivation of transcription and kinase activity
• Modulate protein – protein interaction

The role of OTULIN, a deubiquitinase (DUB):
Deubiquitinating enzymes (DUBs), are a large group of proteases that cleave ubiquitin from proteins and other molecules. DUBs reverse the effects of ubiquitination by cleaving the peptide or isopeptide bond between ubiquitin and its substrate protein. In humans there are approximately 100 DUB genes, classified into cysteine proteases or metalloproteases. OTULIN is an ovarian tumour protease (OTU) that is classified as a cysteine protease.

Custom antibody generation:
Komander et al., (2013) examined the role of OTULIN as a DUB with the help of Cambridge Research Biochemicals (CRB) in the generation of an OTULIN specific custom antibody.

Antigenic prediction:
The key to generating good antibodies heavily depends on the immunising antigen, whether it be protein or peptide. The antigen should be of a high purity and of the highest quality before antibody generation takes place. For the generation of highly specific antibodies to a discrete epitope/s, peptides are favoured and this is where peptide selection becomes of great importance in the process of custom antibody generation. Cambridge Research Biochemicals provide all of their customers with a free antigenic selection service.
To raise an antibody that can bind to the native protein, there are three important factors that need to be taken into account when selecting peptides that will be used to generate antibodies:

1. The region must be accessible
2. The peptide should adopt a conformation that mimics the native structure from which it has been selected.
3. The peptide must be immunogenic

These three main criteria along with a few other tricks and the vital partnership of biologists and chemists allow Cambridge Research Biochemicals to design peptides that generate highly specific custom antibodies.
The custom anti-OTULIN antibody generated was screened to determine specificity of the antibody for its target in wild type (wt) and recombinant cell lines (KR) and the antibody generated identified a specific epitope in both cell lines types.

Once specificity was determined, the antibody was used to determine the effect of OTULIN in Met1 specific polyubiquitin signalling. The linear ubiquitin chain assembly complex (LUBAC) is an E3 ligase complex that specifically assembles Met1-linked ubiquitin chains that regulate nuclear factor κB (NF-κB) signalling which in turn regulates DNA transcription. The recent study by Komander et al., (2013) shows, for the first time, that OTULIN is a dedicated DUB for Met1 specific linkages brought about by the binding of OTULIN to LUBAC, resulting in the inhibition of LUBAC mediated downstream events. Moreover, over expression and under expression of OTULIN results in the sensitization of cells to (Tumour Necrosis Factor) TNF-α-induced cell death, figure below:

This research clearly identifies the complex signalling pathways involved in the ubiquitination and de-ubiquitination of proteins and with the invaluable use of research tools such as antibodies and peptides, further details can be discovered.