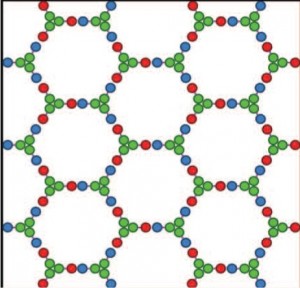 This paper in Science caught my eye earlier in the year. It is another peptide biomaterials paper for which I make no apology – this seems to be a really exciting area of peptide science right now.

The lab then uses synthetic biology approaches to build a series of peptide toolkits that can be used to assemble higher-order structures such as homo-dimers, -trimers and –tetramers and a number of hetero-dimers. This work has been published in ACS Synthetic Biology. These are synthetic peptides around 30 residues in length that assemble reversibly and form stable structures at µM-nM concentrations.

This work has now been extended to make self-assembled cage-like particles (‘SAGEs’). These are made using a shorter (approx. 20 residues) homo-trimer coiled-coils that they call CC-Tri3 that form the core of a ‘hub’.

If either an acidic (CC-Di-A)  or a basic (CC-Di-B) coiled coil is linked through disulfide bonds to the homo-trimer (CC-Tri3), then two types of hub can be formed, hub A (left) and hub B (right):

These hubs can then be mixed and will associate via salt-bridges between the acidic and basic coiled-coils. This should produce a hexagonal network with a pore size of about 5 – 6 nm.

However, rather than producing flat sheets, this structure folds on itself to maximise the coiled-coil interactions and thereby produces closed objects that the authors call SAGE’s.

This would be impressive enough, but the Woolfson group has gone further. By making a subtle change to the amino acid sequence (Asn à Ile) at the interface between the two strands of the hetero-dimer, it is possible to change the structure slightly. This slight change has quite a significant impact on the nanostructure, reducing the diameter of the CAGEs produced from 97nm to 68nm. By using other modifications, structures in the range 50 – 150nm can be produced.

Because the group has so much experience in manipulating the interactions between these coiled-coil structures, it is possible for them to use this as a test system to investigate production of new nanostructures.

These CAGEs offer many exciting possibilities. An obvious one is encapsulation, either by simple entrapment or by incorporation of specific functionality on the inside surface of the CAGE. The Woolfson group is believed to be developing this application in collaboration with at least one industrial partner. Other possibilities include modifying the surface of the particles to facilitate cell binding, antigen binding (e.g. vaccine delivery or cell targeting).