I called Mike Gait to catch up with the work he has been doing for the last few years. When, towards the end of 2010, I first heard of his plans to develop a platform technology for delivery of a variety of cargoes using arrays of cell penetrating peptides (CPPs) I thought it was a fascinating idea. Now, a few years later the work has come to fruition, publications have appeared, patents issued and Cambridge Research Biochemicals is collaborating with Mike’s group to commercialise this technology, known as SELPEPCON.

The initial work, published in Organic & Biomolecular Chemistry in 2013 described the parallel synthesis of peptide-PNA (P-PNA) conjugates using affinity purification for fast isolation of the conjugates without the need for HPLC purification. As shown in Fig. 1, the method involves preparing a biocargo (e.g. PNA) attached, via a cleavable linkage to an affinity tag – in this case PNA 705 is attached to Biotin. A CPP library (‘Peptide’ in the figure) can be prepared separately and then the functionalized and tagged cargo can be linked to each member of the library via complementary functional groups – in this case via ‘click’ chemistry – to produce a library of tagged conjugates. Each one can then be isolated by affinity immobilization followed by release of the conjugate. 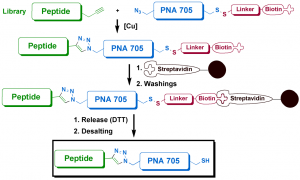 Fig. 1: Overview of conjugation and conjugate work-up strategy of SELPEPCON.

The methodology was applied to create two libraries of CPP–PNA705 conjugates from parallel-synthesized peptide libraries. The conjugates were tested for their ability to induce splicing redirection in HeLa pLuc705 cells and showed that it was possible to use this novel methodology for screening purposes in order to find suitable CPP-biocargo combinations and further optimization of CPPs. Of course, the advantage is that parallel synthesis methods remove the need for tedious synthesis of the CPP, cargo and conjugate making large-scale screening achievable.

The ultimate therapeutic target of the work is a treatment for Duchenne muscular dystrophy (DMD), a muscle wasting disease caused by frame-shift mutations in the pre-mRNA for dystrophin. Splice-switching oligonucleotides (SSOs) have been developed as new treatments for DMD as these can restore the reading frame and generate a shorter but functional dystrophin protein. Two classes of SSOs have been used in clinical trials: 2’O-methyl phosphorothioates and phosphoramidate morpholino oligonucleotides (PMOs). Mike’s group chose to work with PMOs because P-PMOs, consisting of charge neutral PMO conjugated to CPPs, have shown significantly enhanced cell uptake in a mouse model of DMD. Also, PMO works better than PNA in many cell types associated with neuromuscular diseases. 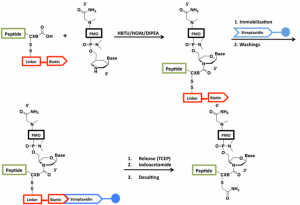 The original synthetic route for P-PMO involved the use of ‘click’ chemistry to attach the CPP to the PMO cargo (as with preparation of P-PNAs shown in Fig. 1). This required the use of a short spacer peptide that is easily made. More recently they have developed a simplified method that uses direct amide conjugation of the peptide that has been extended with a Cys residue (to attach via a linker to the biotin used as the affinity tag) and a shorter XB spacer (X = aminohexanoic acid, B = β-alanine). This method (Fig. 2) works particularly well with the Arg-rich peptides that are most commonly used in Mike’s lab and which don’t require side-chain protection (such as Lysine).

A full description of this new work has just appeared in Nucleic Acid Therapeutics online ahead of print.

While the therapeutic potential of P-PMOs seems significant, synthesis has to date been problematic since commercial supplies of PMO have been limited and PMO monomers unavailable at all, restricting their more widespread use. However, Mike tells me that this is changing and that PMO is about to become more widely available, both in research and industrial quantities.

Another exciting aspect of the work being done in the Gait group is extending this technology to work with peptides that will carry cargoes across the blood-brain barrier (BBB). For example Apolipoprotein E (ApoE) appears to mediate transport across the BBB (see http://www.plosone.org/article/info%3Adoi%2F10.1371%2Fjournal.pone.0032568 for an example of ApoE being used to facilitate nanoparticle transport across the BBB). The SELPEPCON technology will allow the preparation of libraries of ApoE peptides to optimise cargo delivery across the BBB, allowing development of lead compounds for treatment of neurodegenerative diseases and other neurological disorders amenable to gene therapy.

Most of the work to date has been directed at muscular degenerative diseases, working in collaboration with Matthew Wood’sgroup in Oxford. Whereas an in vivo mouse experiment by intra-venous injection requires a few mg of conjugate, a few µg are sufficient for intra-muscular injection into a mouse muscle model system. This amount can realistically be prepared by parallel synthesis of a peptide library, making it feasible to use the SELPEPCON technology to explore a range of different CPP sequences to optimise delivery of the particular cargo. Once a promising lead conjugate is identified it can be prepared in larger quantities for whole animal studies.

The SELPEPCON technology has been patented by the MRC and licensed to Cambridge Research Biochemicals, who now offer a range of peptide conjugate services based on the SELPEPCON technology.  The widespread commercial availability of custom made libraries or single peptide-PNA or peptide-PMO conjugates using this technology should accelerate the pace of research in this exciting area.