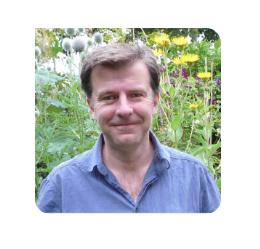 I met John Viles in December 2017 to discuss his work on protein misfolding and degenerative diseases. John is a structural biologist in the School of Biological and Chemical Sciences, Queen Mary University of London. He is interested in protein misfolding diseases, of which the main one is Alzheimer’s disease. Two thirds of all dementias are Alzheimer’s related and John pointed out that it was a worrying statistic for people of our age. Central to Alzheimer’s disease is the 42 amino acid peptide, amyloid β 42 (Aβ 42) that changes its structure and accumulates into toxic fibres.

The group’s most recent paper looked at Aβ forming ion channels; annular structures embedded in the cell surface membrane. Unlike most other ion channels, these are unregulated and allow calcium ions to enter the cell. As there are mM levels of Ca2+ outside the cell and nM levels of Ca2+ inside the cell the Ca2+ diffuses down a concentration gradient into the cell. This reduces the water potential inside the cell, causing water to enter by osmosis. In extreme cases the cell bursts. It is thought that, in the early stages of the Alzheimer’s disease cascade, this entry of Ca2+ disrupts cellular homeostasis. The cells are still alive, but not fully functional.

The 40 amino acid peptide, amyloid β 40 (Aβ 40) is now thought to be benign; it is the Aβ 42 peptide that oligomerizes to form the toxic fibrils implicated in the nerve damage of Alzheimer’s. However, early work had suggested that Aβ 40 could form ion channels as could monomeric Aβ. This was incompatible with what was known about the disease, i.e. it was caused by oligomers formed from Aβ 42.

However, this ‘accepted wisdom’ was based on a flawed premise. The earlier work had used synthetic lipid bilayers rather than natural membranes in a cellular system. Also, they had used Aβ oligomers and reconstituted the lipid bilayers around them. The brain is a cellular system and the Aβ has to insert into the cell surface membrane. John decided that they should work with take patches of nerve cell membrane. These were prepared by taking a plug of membrane using a very fine needle. They then diffused the Aβ into the patches. This was a much more physiologically relevant model. Under these conditions they found that A β40 does not form ion channels at all; neither does Aβ 42 monomer or Aβ 42 fibre. Only Aβ 42 oligomers form ion channels in this model system.

So, the ion channel hypothesis has gone from being a nice idea, but one that didn’t seem to tie up with the physiology of Alzheimer’s disease, to one that matches precisely what is known about the physiology.

John pointed out that this opened the possibility of therapeutic approaches. Once you have an ion channel you can investigate drugs that will block it – something that the pharma industry is good at.

Whilst not claiming to be an expert in the field, I said that it seemed as if all the work on trying to prevent formation of amyloid fibres had not really been successful. John pointed out that, in fact, the fibres seen in brains of patients are quite inert. The process of breaking up and trying to remove fibres might even be counter-productive as it might produce more fragments and oligomers that were more harmful than the fibres themselves.

Another potential therapeutic approach has been to target the γ-secretase that cleaves the Aβ 42 peptide out of the amyloid precursor protein (APP). Unfortunately, this enzyme is essential for other processes, such as NOTCH signalling, so targeting it would have unwanted side-effects.

Gene silencing had been featured on the evening news the night before as a treatment for Huntingdon’s disease. We speculated that it might also be effective in other degenerative diseases such as Parkinson’s and Alzheimer’s. The function of APP is not well understood – it may be involved in synapse formation – but APP knockout mice seem to be well functioning.

As well as investigating ion channel formation by Aβ 42, John’s group is also looking at other amyloid peptides, including N-terminally truncated forms such as Aβ 11 – 40 and Aβ 11 – 42 that make up about 20% of amyloid plaques. These forms are all released at the synapse and they all interact with each other. They have recently shown that there is co-fibrillisation of these short fragments. The longer forms do not interact with each and actually slow each other’s fibre formation. In contrast, the shorter forms interact to accelerate fibre formation.

The shorter forms are more hydrophobic and aggregate more readily. They can seed the longer fragments and it may be that the truncated forms trigger plaque formation. In mice models, the core of the plaques consists of the truncated peptides. Whilst the triggering of plaque formation may not be a viable therapeutic target, understanding what makes it happen in some individuals but not others will be important.

John explained how their system for looking at ion channels was by no means a high throughput system Ideally, you would want to screen many thousands of compounds. This isn’t practical when each one would take a couple of weeks.

They have some nice EM data showing the donut shaped structure formed by oligomers. These are 10 nm thick with a 2 nm pore diameter, making them the perfect size to span a membrane. What he would like to do is use high resolution cryo-electron microscopy, a technique that allows the imaging of molecular detail and is set to replace X-ray crystallography as the main tool of structural biology. QMUL has just bought an instrument and he is looking forward to using it to investigate amyloid structures.

We talked about handling of these notoriously difficult peptides. Amyloid peptides have always been highly challenging synthetic targets, although it seems to be the purification that is the problem rather than the assembly of the peptide. This is certainly his experience. To obtain pure monomer you have to accept large losses; you have to solubilise the peptide, put it down a column and what emerges is a fraction of the total. It may be possible to solubilise the aggregates with urea, although getting rid of the urea may be problematic.

There is also a role for prion protein (PrP)in the neurotoxicity of Aβ. PrP is located in the nerve cell membrane and acts as a receptor for Aβ, stimulating formation of oligomers. Both PrP and Aβ have a propensity to self-assemble into large β-sheet based structures. This is the basis of how the misfolded form of PrP, PrPSc is able to induce mis-folding of the normal form and something similar happens with Aβ forming oligomers.

I asked what John thought the future of the field would be. Laughing, he said that all his undergraduates ask “when will there be a cure for Alzheimer’s?” which is the same question his elderly parents ask! In fact, he is very optimistic. John pointed out that he has been giving undergraduate lectures on the subject for 17 years. When he first gave his lecture, it was 1 hour long; now it is 4 hours – an indication of just how much progress has been made, mostly in the last 10 years.

Alzheimer’s was first described in 1906 but there was little progress for the first 80 years. It was only in 1984 that the plaques were shown to contain amyloid peptide. Since then, our understanding has made real progress. For this reason, he is optimistic that there will be a cure – perhaps not for our generation, but certainly for his students’ generation. John speculates that there will be a drug, rather like statins. Anyone in a genetic high-risk group will take this daily to regulate Aβ and prevent formation of oligomers.

We talked about funding – which John said is dreadful! When he peer-reviews grants he believes that 90% are excellent and should be funded, but he knows that only 10% will receive funding. Although Alzheimer’s is in the news a lot and funding has increased, it is still under-funded relative to the prevalence of the disease. It is the fourth most common cause of death in the western world after heart disease, stroke and all cancers put together. Despite this, it only receives 1% of the funding of heart disease research. Yet, because it is a degenerative disease, the cost to society of caring for those affected is enormous. Even slowing the disease by a year would save billions. The cost to society of Alzheimer’s is 1 trillion dollars, which if you expressed it in terms of gross domestic products (GDP) would make Alzheimer’s the 18th largest economy in the world. The ageing global population is exacerbating the situation. In Europe, Alzheimer’s is due to double in the next twenty years, whilst in the same period in Africa it will increase five-fold and quadruple in Asia.

An interesting calculation John quoted was that research spending on Alzheimer’s in the UK is currently equivalent to 14 pence (£ 0.14) per person each year and yet he didn’t think there would be anyone in this country who would not be prepared to give the price of a coffee per year. That would increase the amount of money available by ten- to twenty-fold (a flat white is not cheap in London!) This would have a marked impact on the prospects for a cure in the more immediate future.